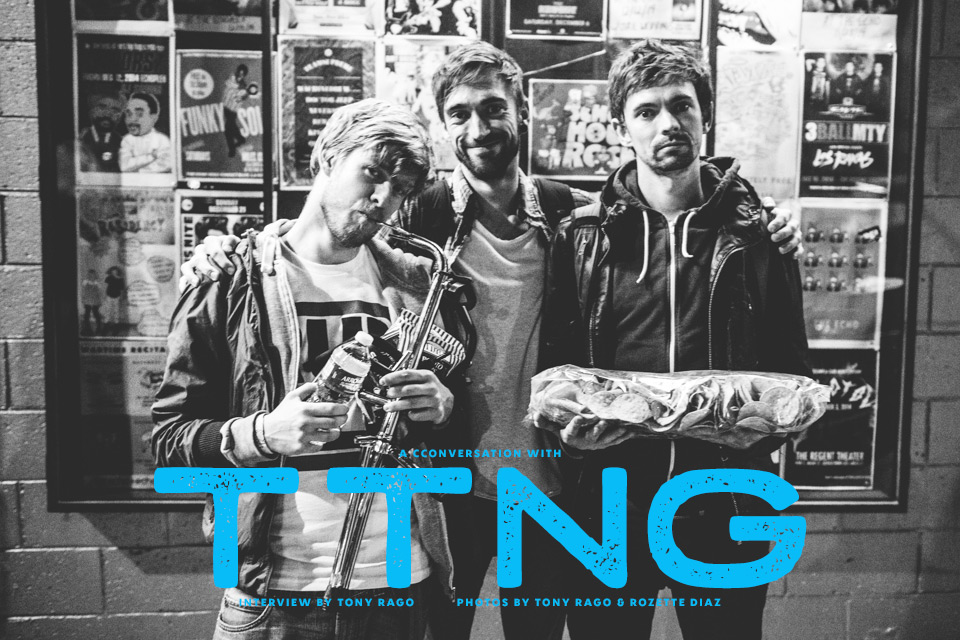 On the night of TTNG‘s last show of their 2014 US Tour, I was able to spend time with their lead guitarist and founding member Tim Collis. For those of you who don’t know TTNG (formerly This Town Needs Guns), they are a 3-piece rock band hailing from Oxford UK and are currently signed to the superb indie label, Sargent House.

The band has been around since 2004, influencing fans and inspiring musicians around the world with their unique and emotional sound. Beyond their recent name change, they also experienced a line up change as well, with the departure of rhythm guitarist and vocalist Stuart Smith (replaced by Henry Tremain of Pennines), the addition of Tim’s brother Chris on drums (replacing Matt Bennington), and the departure of bassist Jamie Cooper. You would think with so many changes that the band’s sound would suffer or that their fan base might dwindle, but the change has only seemed to make their sound tighter and they are more popular than ever. TTNG is only just scratching the surface of their sound, with a new release in the works and their sights set on global domination.

TONY: First, I’d like to say that you guys are honestly one of my favorite bands so this is a great honor to be able to sit with you to ask some questions.

TONY: Your album 13.0.0.0 was your first album with the current TTNG lineup. Now that you’ve had a little over 2 years in the formation, what has the experience been like?

TIM: Yeah, it’s been great actually. I think when you have a major lineup change you are kind of apprehensive about it, I guess with anything where there is a big change it’s kind of about being apprehensive. Yeah, Henry has been playing with us for like 3 years now at least, and it’s been going really well. He’s totally taken it in his stride, he’s such a great musician he doesn’t make it look difficult in terms of transition.

TONY: Any talk of expanding again to a 4 piece to include a bassist, or are you is remaining a 3-piece your preference?

TIM: We’re pretty happy as a 3-piece, the dynamic seems to work really really well. I don’t know what it is, but 3 seems to be a really good number to work with, not just in terms of personal lives and less people to have to organize and so on, but musically we seem to be able to bounce ideas around a lot quicker. And that is no sort of disrespect or negativity towards having more members, but it just seems to be have been a very a really smooth process and it’s been very natural. 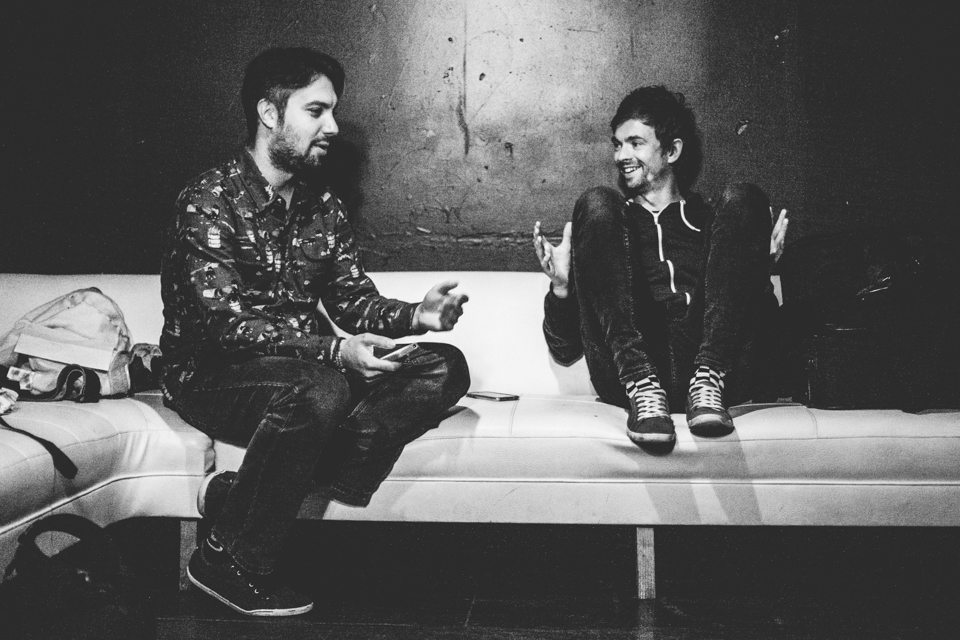 TONY: Are you working on/planning to release a new album soon, and if so, what can we expect from this upcoming release?

TIM: Actually yeah, at the end of this tour, so like tomorrow, we are going to the Farm that the label Sargent House owns, a couple hours outside of the Los Angeles. We’re probably going to be doing some demos for some new stuff and we’ll hopefully get an EP together for next year. Well, we’re thinking an EP, but it could be more.

TONY: Any specific thoughts or ideas for this new EP in terms of your overall sound?

TIM: I mean, it’s nothing sort of drastically different. I mean it’s early days, so I guess these demos will sit in a very similar kind of ilk to the old stuff and then we’ll see when we get to studio stage what we decide to do when we’ve got the time to really listen to them as well.

TONY: You have a lot of material, new and old. What’s your favorite song to perform live and why?

TIM: I don’t know if I have a favorite really. I guess it’s a hard question, because we’re kind of at the stage where are playing what we consider all old stuff, I guess. I mean, some of it is obviously a lot older than other songs. I don’t know, it would be an easier question to answer when we start playing new tracks because they’d probably stick out. In saying that, we are playing one new song, so I’ll go with this untitled new song that we are playing tonight just because it’s a bit fresher. I’ll tell you that it’s fun as well because Henry from Mylets joins us to play bass on that. I think it’s called Snoopy at the moment, I don’t know why. 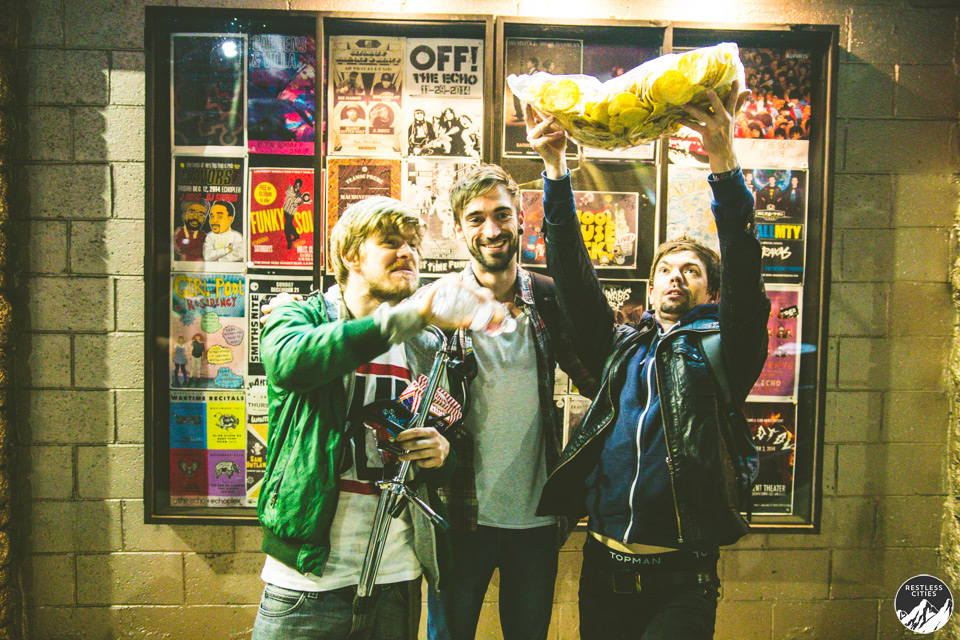 TONY: Speaking of Snoopy, I know you guys do a lot of stuff on your Facebook page with Animals and stuff. What’s the reasoning behind that?

TIM: I think animals seem to amuse us. You know, if they’ve put clothing on or someone has got them in a particular sort of situation and it’s amusing, we get a hold of it pretty quick. We’re just morons and it amuses us.

TONY: I know last year you made the choice to change the name to TTNG due to all the gun controversy. Your fans have embraced it, but do you ever miss referring to yourself by the original full name, This Town Needs Guns?

TIM: It’s all kind of fairly trivial, in terms of the music is the focus and so on. No, I mean, I don’t miss the name. It kind of was a logical thing in a way which probably doesn’t seem that way to most people, but as Henry joined it was new time for us and you know, none of us ever particularly ever liked that band name, and it seemed like at this point it was a good time to change and we kind of did it as soon as we could. Basically, the problem we found was that it was a statement that for us never had any political association to it, but people over here thought it meant quite a bit more. People in support of guns were often like “yeah, you guys are great!” and love the band name for that reason, and we sort of felt a bit like well yeah it really doesn’t come from that place. It comes from the UK were it’s really an ironic, sort of stupid band name.

TONY: So if it wasn’t Guns, what would the town need?

TONY: You guys have toured quite a bit this past year. With this being your last show of the tour, where have you found the fans to be the most receptive?

TIM: We always have a great show in Chicago. The fans there are kind of our perfect set of fans. It’s weird, we’ve had some shows this tour where let’s say that alcohol has gotten the better of people, I wouldn’t say like ruining the show, not for us but for other people, but they’ve been kind of loud and obnoxious. You know, we are not like anti-drinking or anything, but some people have had no control and has kind of put a downer on some of the shows, which has been a shame. But yeah, Chicago has been a favorite for a while, and we have got kind of a bond to that city cause a lot of influences come from there, like BIlly Corgan. The fans are just so great there. They’re kind of the perfect balance of really respectful and you could have a good laugh with them. They’re really excited, and up for a good time. It doesn’t seem to matter what day of the week it is, there are dudes who roll in from work and are just really up for it, and that’s been cool. But yeah, we’ve had some great shows this tour so it’s kind of hard to say, but Chicago sticks in my mind.

TONY: Well, I’m from Chicago if that helps.

TIM: That was the right answer.

TONY: Is there a place in general overall that you’ve just thought is amazing overall, like Japan?

TIM: Yeah, actually Japan is probably a favorite for all us. It’s just an incredibly different place, culturally obviously. It’s kind of one of those places where it’s rare for us to go there so that’s always special. The people are the next level of respect, it’s crazy. We first played some shows there in 2010 and the crowds were just like silent, and we were just like this is super weird, I don’t think they like it, this odd. But, it’s just that they are so focused and so polite and it’s so wonderful. It’s a really different energy, because there is still an energy between you and the crowd but it’s so different than rowdy people in the UK, Europe, or the US. So, yeah Japan would probably be up there.

TONY: Any places you haven’t toured that you’d like to hit? I know I have a lot of friends in the Philippines who want you to play there.

TIM: Yeah, I’d love to hit some more places in Asia for sure, but I know we also want to go to South America. There seems to be pockets of fans in places like Chile and Argentina that hit us up quite a lot and say can you ever come out, but it’s such a costly thing to do that it’s kind of difficult. But yeah, I would say South America would be awesome to go to.

TONY: Math-rock as a whole, more so than other musical genres, really seems like a community where bands connect, collaborate, and inspire each other. Is this something you’ve noticed, and are there any bands that TTNG is close with?

TIM: I think like, to be honest, any band on the label, as soon as we meet them there is this bond and they are not necessarily math-rock. I mean, I don’t even know if we are necessarily math-rock, it’s kind of subjective really, but any band off the label we seem to kind of gel with. I think most of the bands we meet are good people, and we have a lot in common with, so it’s fairly easy to be in that situation, but I guess I’d have to say that the bands we’ve toured a lot with like Henry from Mylets it’s been great to kind of bond with him, and Emma this tour in particular. Yeah, I don’t know if there is any one band that we are super super close with. There are loads we would absolutely love to get see all over the world, and it’s kind of rare when you see obviously people further away.

TONY: Are there bands that you’ve been listening to right now that you’d like to recommend? 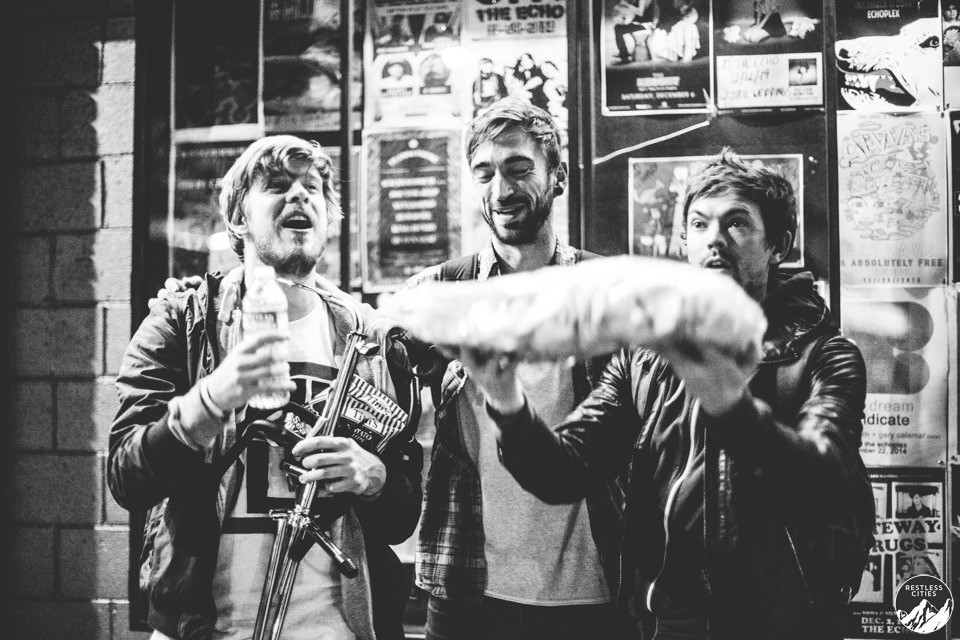 TONY: Finally, what is your mantra, either collectively as TTNG or individually?

TIM: I guess, just being ourselves. I think we’ve said before at some point that people can get a bit caught up of the persona of what’s expected from being in a band, and it’s just kind of being honest really and having respect for other people and hopefully having them respect you at the same time. Just generally spreading a positive vibe if possible, which is tough some times especially with a long tour. Like if you get sick, like Henry from Mylets has been pretty sick, or you know if you get tired and tough and stuff it can really get really affect trying to get that across and have that positive energy. Yeah, when we’re all good and we’re all happy, it’s cool and you can really feel it with the crowd which is nice.